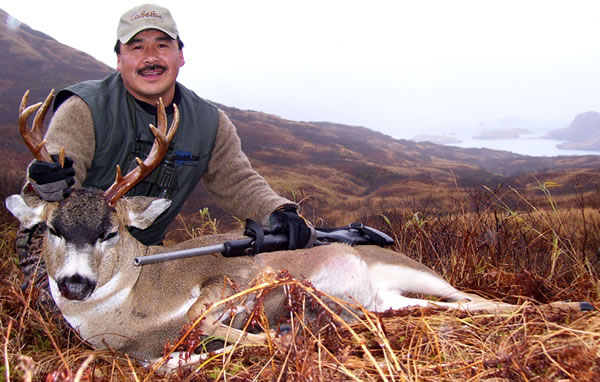 The Sitka black-tailed deer (Odocoileus hemionus sitkensis) is native to the wet coastal rain forests of southeast Alaska and north-coastal British Columbia. Its range has also been expanded by transplants, and established populations now also exist near Yakutat, in Prince William Sound and on Kodiak and Afognak islands.

The average size of Sitka black-tailed deer, while larger than other subspecies, is small when compared with other deer species from the Lower 48, like white-tailed and mule deer. In general, October live weights of adults are about 80 pounds for does and 120 pounds for bucks. The antlers aren’t typically as impressive as with their southerly cousins, either, with normal adult antler development being three points on each side. Very few score more than 110 points by the Boone and Crockett system.

Deer populations in Alaska are dynamic and fluctuate considerably with the severityof the winters. When winters are mild, deer numbers generally increase. Periodically, however, a severe winter will cause a major decline in the population. Deer have a high reproductive potential, though, and depressed populations normally recover rapidly.

Throughout much of the range of Sitka black-tailed deer, normal dispersed hunting pressure has little influence on deer numbers. Bag limits vary from complete closures to six deer of either sex, depending on populations. Early season hunting is concentrated in the alpine and subalpine areas, with the largest portion of the harvest taken in November during the rut, when both sexes respond to a call resembling the bleat of a fawn. Additionally, during late November and December, heavy snow sometimes concentrates deer at low elevations allowing high harvest levels when local weather conditions are favorable.